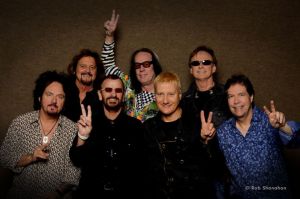 It was an incredible honor to, first, be accepted as a contributor to Examiner.com subsidiary AXS and their widely published audiences. It was an even greater honor to debut my first AXS contributing article as Examiner’s Dallas Music & Special Events AXS Contributor on the historic sold-out appearance of Fab Four Beatles member Ringo Starr & His All-Starr Band in Tyler, Texas, the first time a Beatles member ever making an appearance in Tyler.

The excited and overjoyed crowd exuberantly participated with familiar Beatles classics, “Photograph,” “Yellow Submarine,” “It Don’t Come Easy,” “I Wanna Be Your Man,” “Give Peace A Chance,” “Don’t Pass Me By,” and “Act Naturally,” combined with tracks mixed expertly together with a refreshing and equally fascinating entertaining set of choice selections of the celebrated All-Starr star members cherished hits, “Rosanna,” “Africa,” “Black Magic Woman”/”Gypsy Queen,” “Oye Como Va,” “Evil Ways,” “Love Is The Answer,” “Broken Wings,” “Kyrie,” “You Are Mine,” “Bang The Drum All Day,” and “Hold The Line.”

As the excitement in the crowd built and the electricity in the air came to a head, everything seemed to just flow over as the packed auditorium joined in with beloved Beatles’ hallmark “With A Little Help From Friends” making the entire evening one continuous magical night!

Here’s a link to the article on AXS.com – Ringo Starr & His All-Starr Band Valentine’s Day in Tyler

As Examiner’s new Dallas Music & Special Events AXS Contributor and with this huge honor as my first music article ever, I am really excited and looking forward to covering upcoming Carlos Santana’s Corazon Tour event in Grand Prairie, Texas on March 18th at Verizon Theater.

Check back on this blog for a posting of both the pre and post-event article coverage as we near the event!