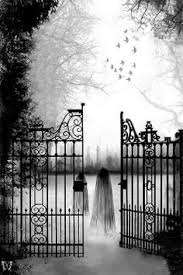 This story emerged on a sleepy sunny day in Dallas in 2008. My office was located near Restland, one of the largest cemeteries in the DFW metroplex area. There’s a road that goes right down the middle of it. On both side of the road there is a little two foot tall fence like you see around a lot of cemeteries. Where the little road that goes through the well manicured and quite scenic cemetery meets the main road, there’s a gate with stone walls holding the gate in place. The wing walls curve up to six or seven feet at the gates. Anyway, it was around two or three o’clock in the afternoon, you know when you sometimes get that sleepy feeling and want to take a nap. I was driving back to the office from a late lunch and looking out across the gently rolling landscape and fixed on a point between a couple of giant old oaks. As I drove and saw the point clearly over the little two foot fence the taller gate neared. For the brief moment as I passed by the gate, and only looking through the gate between the flanking walls as I passed, I saw a certain, but shadowy figure dart from one tree to the next. In fact it looked like it came out of one tree and went into the other.

Ordinarily, this wouldn’t have freaked me out so much. I am a scientific explanations kind of guy. I made a perfect 100 in two semesters of Physics at the University of North Texas. I know what I saw, at least I think I do, and that feeling I had was unmistakable. I saw what I thought was a ghost. The feeling stuck with me the rest of the day, but when it happened I remember distinctly, my stomach just sank, chills swept over me and uncertainty ruled me until I went to sleep that night. I had been in creative writing at the time and I was already thinking up plot material for a number of other stories, three or four. I got busy by writing down what I saw and thinking of how I could write this up without it being in Dallas and at that cemetery. That’s when I turned to Google maps. As I combed across a satellite image of the US I thought about a reason for a central character to be driving by a cemetery and seeing something otherworldly.

It finally dawned on me to have it along the Tennessee-Mississippi border and to make it about bootlegging, why I can’t be certain, it just did. The main character, Brandon Fitts, is a young, late twenties-ish returning soldier from the Iraq War. He served four tours and had saved a lot of his pay from there, being single and without an immediate family. When he got back, he wanted to use the money and build himself a little house and automotive shop on a piece of land his grandfather had left him so he could work on cars and live close by his work. It was a dream until he ran short of the money to complete the shop.Turning to his racketeering, no-good uncle Alfonse Dumont, who has his hands in every dirty dealing business in the county, because he has no where else to turn, Brandon seeks help and assistance just to finish his shop and lead an honest life fixing cars. His uncle was sure to lend him the money he needs, but only if he’d come to work for him running moonshine across the border. Enter the two sheriffs, John Brady in Tennessee bent on stopping all bootlegging from coming through his county, and Sheriff Jerry Lemmon in Mississippi on the take so much he’s willing to do literally anything to keep the cash cow’s milk flowing.

With the help of a newly deceased Bacchus Road cemetery’s caretaker ghost, Otis Creamer, Brandon and his girlfriend Shelly discover most of the souls in the cemetery are trapped there and bound to an unrest on earth because of Brandon’s uncle, who put them there before their time. As the good sheriff begins to suspect Brandon in the disappearance of the caretaker Otis, the clock begins ticking and Brandon must find a way to reveal his uncle without getting caught by him before he’s framed for Otis’ murder.

Writing this up was extremely fun, learning about the history and googling the maps of the area, trying to incorporate as much reality as possible really made it take shape and I pieced it in all along as I went. Oftentimes that’s how it happens. Just kind of takes shape in plausible ways that sound like they make sense in the natural order of events. Then, once it’s all together and each scene gets worked through, the story gets a final polish. Easy as pie.

2 thoughts on “Inside Look: The concept and creation of ‘Between the Trees’”